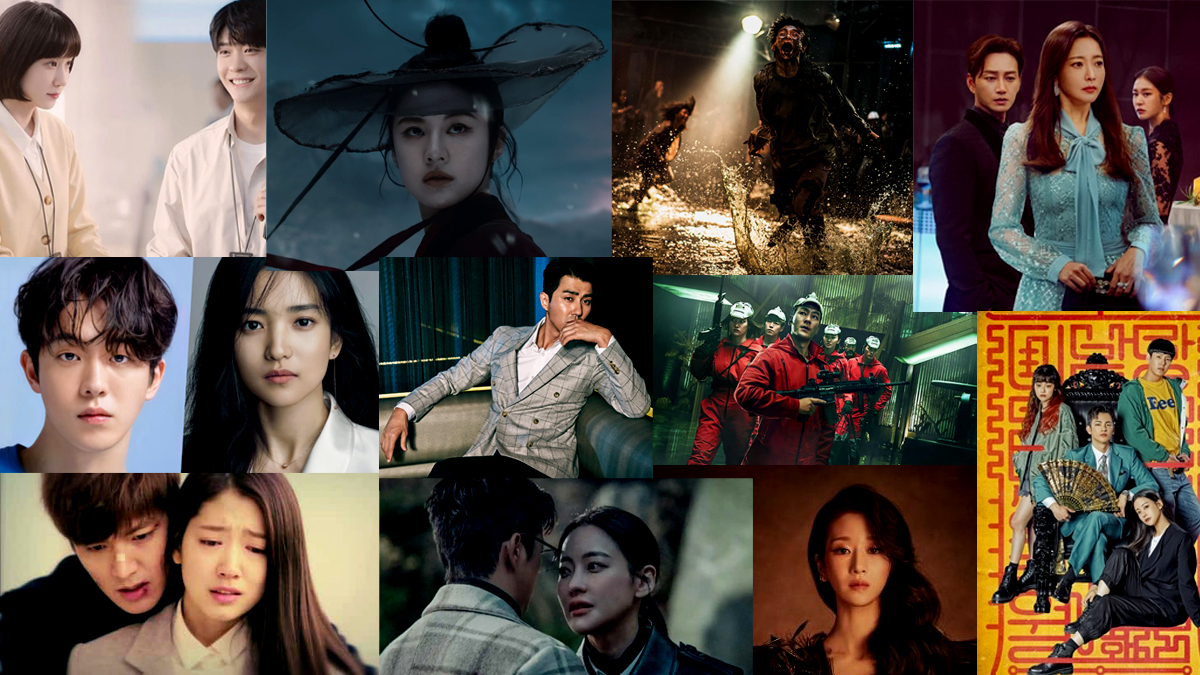 It is no surprise that K-dramas are the hot cakes in the entertainment world due to their addictive plots, well-written characters, and unique genres. No melodramas or never-ending sagas, great casting, soundtracks, and directions; there are multiple reasons how Korean dramas successfully establish emotional connections with millions of global audiences.

According to experts, the user base of K-dramas is primarily women of color and a large number of white women in particular. As a result, they are constantly streaming hot on Netflix, Hulu, or Apple Tv. If you plan to binge-watch some of the most popular K-dramas of 2022 ranked according to IMDB, check out this post!

Extraordinary Attorney Woo is an ongoing K-drama that has garnered a lot of popularity from all over the globe. It follows the life of Woo Young-woo, a young lawyer with Asperger’s Syndrome and a high IQ of 164. Being extremely smart and creative, she never forgets anything she sees. She graduated with the best grades in her class at both college and law school. Unfortunately, she has low emotional intelligence and suffers from social interaction skills, which makes her daily life difficult.

Fans love this K-drama because of the authentic depiction of an autistic person and the intriguing cases in each episode. Its creative artwork and graphics make the show hard to miss for Korean drama fans.

The backdrop of Alchemy of Souls is the fictional country of Daeho. It follows the journey of Naksu, an elite warrior, but her soul is trapped inside the physically weak body of Mu Deok. Jang Uk, on the other hand, comes from the noble Jang family holding an unpleasant secret about his birth. He used to be a troublemaker but his life changes as he comes across Mu Deok. The title of the show Álchemy of Souls refers to the magic spell that twisted the protagonist’s fate by allowing souls to switch their bodies.

Fans loved this fantasy drama due to the lingering plot, good-looking characters, and humor. The slow romantic drama and the chemistry between the lead couple will hook you to each episode of the show, and you will always come back expecting more.

Remarriage & Desires is a satirical take that revolves around a matchmaking company called Rex. When Hye-Seung’s husband, Nam-Sik, commits suicide, the middle-class wife decides to seek revenge on Yoo-Hui. She joins the greed, lust, power, and money race by signing up in Rex. The company exists to serve the wealthiest high-class individuals where women strive to meet a desirable bachelor based on their wealth and background.

Fans liked this show because of the characterization and intense plot building. Even though many fans are disappointed as the show fails to live up to its full potential, it is overall a good watch.

All of Us Are Dead

If you are a zombie apocalypse show lover, you will love this horror show based on a webcomic Now At Our School by Joo Dong-Geun. All of Us Are Dead is about a virus that breaks out at Hyosan High School. After getting infected, the students turn into human-eating zombies. The outbreak spreads fast, and the students find themselves trapped inside the school with zombies surrounding them. Two friends, Nam On-jo and Lee Cheong-san must escape the school ground to survive.

Fans loved this show because of the thrilling plot, scary locations, and dizzying special effects. With a range of unique characters and action sequences, this Korean drama is well received by critics as well as the original comic fans. The second season of the show is already on its way.

The critically acclaimed Korean drama is based on the 2017 bestselling novel by Min Jin Lee. It depicts the journey of a Korean immigrant family across four generations. The story is set against the backdrop of Japanese-occupied Korea, where the family fights all odds to survive. The series is certified fresh on Rotten Tomatoes and scored 87 out of 100 on Metacritic. Pachinko is one of the best Korean dramas of 2022.

If you’ve watched the original Money Heist or La casa de Papel, you will probably not find Money Heist Korea interesting. The plot and setting are almost identical to the original one with a Korean twist. Recruited by the mastermind professor for a big job, eight people overtake the Unified Korea Mint trapping innocent hostages inside. The police must stop them and rescue the hostages safely.

Fans like this show because of its excellent cast and uniqueness, which makes it different from the original one. The animosity between North and South Korea is also well explored in the show, resulting in high tension between the hostages. The plot has many future development scopes, and some characters are explored in depth. You can try this one if you haven’t watched the original Money Heist.

Business Proposal is an office rom-com that follows Shin Ha-ri and Kang Tae-Moo. As Ha-Ri disguises as her friend for a blind date to scare away the possible suitor, she bumps into the CEO of her company. Kang Tae-Moo is a workaholic CEO who gets annoyed by his grandfather as he sets up blind dates for him. To get rid of the situation, he proposes marriage to Shin Ha-Ri.

Business Proposal is based on The Office Blind Date by Hae-Hwa. If you are searching for a sweet romantic drama, you cannot miss out on this K-drama. Fans loved this show because of the acting and chemistry between the actors, making it a huge success.

The story follows the life of Lee Ra El, a Tango dancer, a wife, and a mother who bewitches everyone with her aura. But behind her glamorous facade, she hides a painful past and misery.

Lee Ra El had a beautiful family. But when she was a child, influential people caused her father’s death and her family’s collapse. She then prepared herself for the next 13 years to seek revenge on the person responsible for the tragedy.

Her main target is Chairman Kang Yoon-Kyum, who runs the profitable LY group. Her weapon is divorce. By placing herself at the center of USD 1.6 billion, she hopes to seek her revenge with the aid of Seo Eun Pyeong and Jang Moon Hee, her foster mother and the conspiracy partner.

Fans love this show because of the acting and plot development. The songs and the essence of tango sets the perfect mood for the plot. If you haven’t watched any Korean dramas yet, watch this, and you will be hooked.

Soo-Jae is a cutthroat lawyer and the youngest partner at TK Law Firm, the best one in South Korea. Her self-righteous drive her to win cases. Despite being highly talented, she earns a demotion to work as an adjunct professor at Seojung University law school when she takes up an unexpected case. While working at the law school, she comes across Gong Chan. Gong Chan has a warm heart despite a painful past.

He falls in love with Soo-Jae because of her kindness and is ready to do anything to protect her. However, Choi Tae-kook is the chairman of the law firm, who would go to any extent to satisfy his desires.
Why Her is full of twists and heart-fluttering moments, fans find this mystery-filled romance hooking.

Twenty Five Twenty One is a high school K-drama centering around a teen fencer. Na Hee-Do is on the fencing team at Seonjung Girls’ High School. But due to a financial crisis, her team gets disbanded. She then transfers to Taeyang High School to join the National Fencing Team. Yi-Jin is a son of a wealthy businessman whose family becomes broke after being hit by the financial crisis. After his family gets separated and his dad becomes penniless, Back Yi-Jin takes up many odd jobs and finally becomes a sports reporter.

Fans like this show for authentic storytelling and charismatic characters. The story unravels the many chapters of friendships and relationships.

Adamas is a gripping thriller revolving around the murder of the father of twin brothers Ha Wooshin and Suhyeon. Twenty years after their father’s death, public prosecutor Soo Hyun is approached by a journalist who shows evidence that the death was a part of a larger game plan.

Meanwhile, Ha Wooshin receives an invitation to write a memoir on the owner of Haesong Group, Kwon Jaekyu. Upon visiting the estate, the novelist realizes the mansion, employees, and people are somewhat mysterious, and they have deeper truths to uncover.

The intriguing plot and characterization hook the fans to this K-drama until the end. The intertwined subplot of a political leader who attempts to become the president makes the thriller drama highly interesting.

Tomorrow is a live-action adaptation of the 2017 manga webcomic of the same title by Llama. The show is centered around a jobless man Choi Jun-Woong who gets into an accident when he discovers an old man trying to jump off a bridge. He saves his life but lands in a coma. As he roams around as a lost soul, he finds Grim Reapers Koo Ryeon and Im Ryoog-Gu and gets recruited for the grim work. Together trio saves many lives as they prevent people from committing suicide.

Our Blues is an anthology that follows the diverse characters residing on Jeju-do, the largest island in South Korea. It is a complicated plot of 14 characters divided into eight stories that tackle many sensitive issues of the characters living in the same neighborhood. From unprotected sex to teenage pregnancy, child abuse, savage bullying, debts, and death by suicide, the plot covers many complex issues in a meaningful way. If you are looking for a heart-wrenching K-drama, you should watch Our Blues for poignant storytelling.

Set in Seoul, Café Minamdang follows Nam Han Joon. The lead protagonist Nam Han Joon is a former criminal profiler who has become a fraudster running his fortune-telling shop Minamdang. Through this shop, he disguises himself and runs his scams. His impressive physical appearance and charismatic talking skills draw clients toward him.

Although he cheats the customers for money, he likes to get deeply involved in their cases to solve them. Nam Han-Jun’s criminal partners are Gong Su-Cheol, who runs a private detective agency, and his younger sister Nam Hye-Jun, a national intelligence service operator turned expert hacker.

On the other hand, Han Jae Hee is an expert detective dedicated to her work for the last three years. But in her zeal to corner a criminal, she gets involved with Nam Han Joon. Will this involvement jeopardize her career?

Fans loved this Korean drama because of its rich humor and catchy phrases, which make up for the stretchiness. Additionally, the acting and portrayal of the shady characters make it worth the watch.

Have you watched these K-dramas? Which one is your favorite?