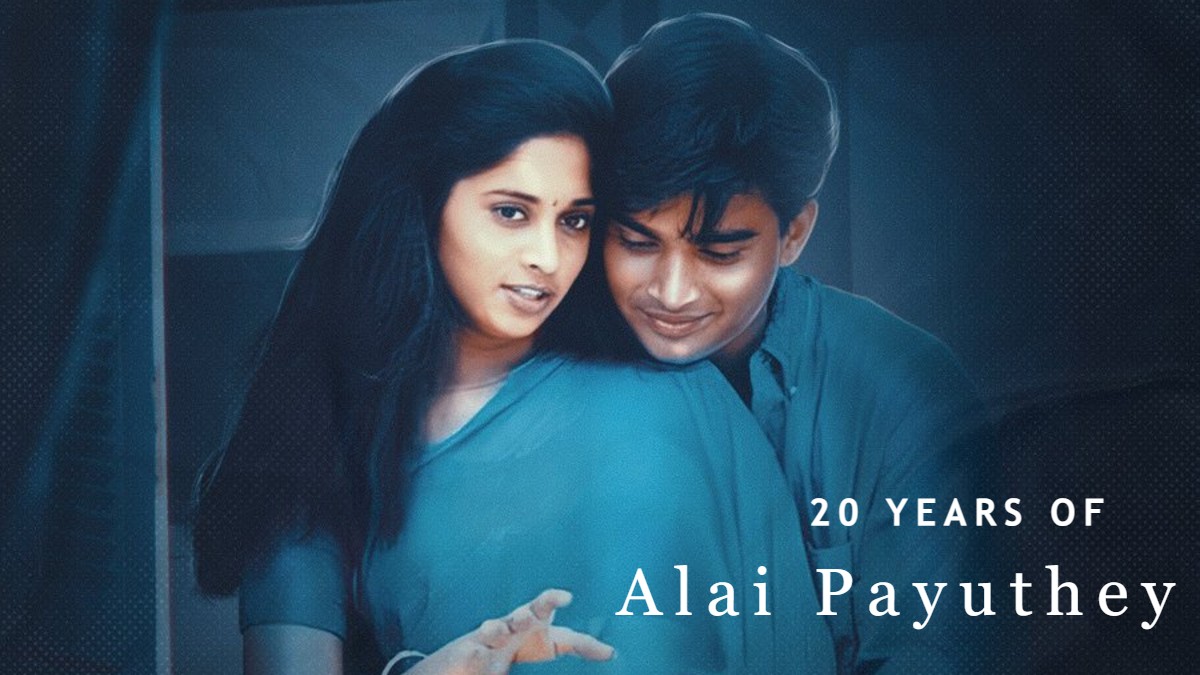 Mani Ratnam’s Alaipayuthey is a 2000 release Tamil film, which also marks the debut of Bollywood actor Madhavan. The film was later remade as Sakhi in Telugu and Saathiya in Hindi, which were huge commercial successes. The film starred R. Madhavan (Karthik) and Shalini (Santhi) in the leading roles and has become an iconic pair for decades.

Alaipayuthey is a beautiful, timeless romance that will stay on our watch lists forever because of these reasons!

You can’t believe, Alaipayuthey was the Tamil debut of R Madhavan unless someone told you! Such is his charm, acting, and screen presence. Madhavan became the national crush of Millenials, and this film justifies why!

It will not be an exaggeration to say every character has lived their role in Alaipayuthey. Be it the arrogant father of the hero, the supportive sister, or the homely mothers, they have all delivered their best performances in this film, which makes it so relatable and ‘real.’

Pachai Nirame (Pachadanamey in Telugu and Saathiya in Hindi) will remain one of the most picturesque songs ever in terms of visuals and music. A. R. Rahman won the Filmfare Award South for this soundtrack.

Girls will fall for you if you flaunt a swanky bike you bought with dad’s money? No. Santhi would rather support Karthik with his tiny start-up than marry the son of a wealthy family.

Would young girls do anything to get married into wealthy families? Not happening! When Karthik’s father scorns the middle-class girls and boasts affluence, Santhi and her family show him the door, unwaveringly. Alaipayuthey teaches us that a prosperous wedding alliance isn’t worth sacrificing self-respect!

SEE ALSO: 10 Reasons To Watch Emily In Paris With Your Girls Gang!

Is the ultimate goal of a woman to get married? Of course not! In Alaipayuthey, Santhi’s elder sister works for a bank to fund her medical education. Santhi herself is aware of how her middle-class family is toiling to make her a doctor. She endeavors with determination and wouldn’t let anything hinder her studies. She values the passion that her family has for her education. The two daughters strive for a better life for the family. Marriage doesn’t have to push aside dreams and aspirations. Marriage can wait while you are building your future.

Should women cook and manage the house while men earn money? Not in their home. Karthik has a software start-up, and Santhi is a doctor. They both work and cook and share equal responsibilities. Isn’t this cool to see things exactly the way they are supposed to be? Also, Karthik’s start-up is in a nascent stage while Santhi has a comparatively stable job. Yet, this never comes between the couple as they progress in their way, in Alaipayuthey.

Apart from these, there are many myths that Alaipayuthey has debunked. All these gender roles prominently represented in entertainment and popular culture don’t take time to turn into stereotypes. We must celebrate these films that celebrate a women’s independence, individuality, and courage. Because the film was released almost 21 years ago, it had to be outstanding to show such ‘out of box scenarios.

In our lives, not everything happens as per our wishes-be it career or marriage. During these challenging times, how we support each other matters the most, rather than indulging in the infamous man vs. woman battle! In Alaipayuthey, Karthik and Santhi have defined what we call ‘Power Couple’ today!

One thought on “5 Reasons to Watch and Re-Watch Alaipayuthey”