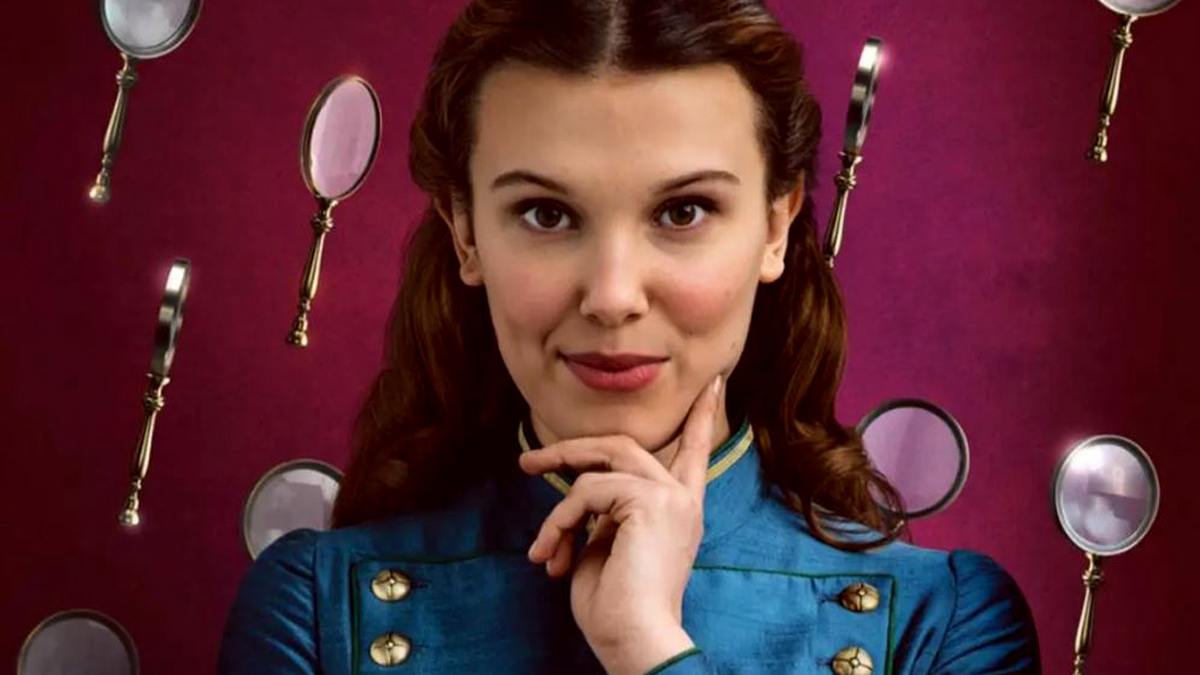 Thanks to Nancy Springer, Enola Holmes is one of the finest characters we have the privilege to watch. With Enola Holmes movie now turning into a franchise, we have many chapters to unfold on our Netflix screens every year. Women in lead roles are all I die for. And this movie has put a sensible spotlight on women empowerment. Now tell me, do you love adventure, mystery, and high intellect? Then you shall praise Enola Holmes 1 & 2 … and many more upcoming parts!

Enola Holmes 1 unleashes the detective within the main character Enola. It focuses on Eudoria Holmes disappearing and Enola trying to find her mother while tearing the elite society into pieces. You can rest assured that each scene is unpredictable and an absolute delight. Played by Millie Bobby Brown flawlessly, you can never get enough of Enola Holmes.

What Is The Movie About?

Let’s hold on! You might be thinking is Enola Holmes smarter than Sherlock Holmes, the most well-known detective of all time? Taken from her mother and brother Sherlock Holmes, Enola’s intellect happens to be sharper than anyone’s. Can you feel the empowerment too?

Enola Holmes 2 sheds more light on building Enola’s lady detective character. The movie begins with Enola opening up her own detective agency in the Victorian era when women never thought of being in a man’s shoes.

While Enola awaits a client, she is constantly disappointed by people, instead looking for her brother, refusing to believe a girl could be a detective- gender and age-biased people. However, the ticking clock and frustration served her with her first or perhaps second case. A penniless, little girl Bessie approaches Enola to find her missing sister, giving Enola her first official case.

Trying to unravel the mystery of the missing girl Sarah, Enola gets dragged into a dangerous side of the world. The lady detective must take the help of her friends, Sherlock Holmes, and mother Eudoria. However, while investigating, she falls upon Sherlock’s case and there seems to be an unusual connection. Thus, shows a breakthrough in her case leading to an unpredictable truth.

What Is The Plot Of Enola Holmes 2?

Girls working in the matchstick factory were suspiciously dying of the deadly disease Typhus. Bessie’s sister Sarah Chapman was missing. Sarah’s best friend Mae was found dead in a room and someone was following Enola. On the other hand, Sherlock was dealing with a missing money case that somehow connects with Enola’s case. Now let’s begin with the details.

When Sarah went missing, Enola went to the matchstick factory with Bessie as the new worker/match girl. She observes the factory and secretly enters the office of the owner Mr.Lyon where she finds a register with torn pages. She understood Sarah knew something discreet, hence, everyone called her a troublemaker.

As the investigation goes on she comes across Sarah’s other job where she finds another clue; a piece of ciphered poetry written by a gentleman, probably Sarah’s love interest. On the journey of deciphering the poetry and trying to find the lost girl, she finds Mae bleeding in a room. Enola gets caught by inspector Lestrade and superintendent Grail with blood in her hands and another evidence up her sleeve.

Enola escapes from there and finds herself in her brother’s apartment, 221 Baker street. The two exchange their case details with each other trying to solve the cases. While Sherlock further investigates Enola’s case as she was falsely charged with murder, Enola on the other hand figured out that Lyon’s son William was the secret love of Sarah Chapman. Meanwhile, Sherlock also finds a breakthrough in his case and the connection as well.

Where Was Sarah Chapman?

Enola Holmes goes to the ball hosted by Henry Lyon and recognizes William. Sherlock solves the mysterious cipher created by the thief in his case. However, Enola gets arrested around midnight and is jailed by Grail. He brutally questions her behind the bars and later sends her to prison. However, her mother Eudoria Holmes and Edith successfully rescued Enola. Ah the Holy Trinity!

Right from there Enola reaches at Tewkesbury’s place and asks for his help. That’s when Cecily also visits Tewkesbury and Enola figures it all out. Well at least most parts of it. Sarah is Cecily; Sarah and William were in love and working together to expose the reality of the matchstick factory. Enola visits the factory with Tewkesbury where she finds Sherlock also investigating. The two went to the main office and found William dead.

Sherlock figures out his thief was William and he stole from the Treasury minister. Tewkesbury, Sherlock and Enola go to the The Paragon theater to figure out the rest of the case and find the proof as well as Sarah. The factory had switched to a cheaper phosphorus to make the matchsticks which was killing the girls in the factory. Henry Lyon and Lord McIntyre had a contract for the same.

Who Is The Villain In Enola Holmes 2?

After a long fight with Grail and his men, the 3 finally won. Lord McIntyre came there and tried arresting Sarah for stealing personal information and blackmailing. However, Sherlock disclosed that it was Lord McIntyre’s secretary Mira Troy aka Moriarty who was the real culprit.

She hired Grail to get back the documents she was using to blackmail. Ultimately she was going to point the murder of William to Lord McIntyre. However, a small mistake led to her intentions revealing. “Treated like a common servant when I have twice the mind of yours,” said Mira Troy out of anger which showed that her motive was to punish the rich especially the men in power.

“Why shouldn’t I be rewarded for what I can do? Where is my place in this … society? I am a woman. I cannot join clubs, I cannot own shares, I cannot advance myself as they can. So, I found my own way. And it was fun” – Mira Troy or may I say Moriarty.

Lord McIntyre burned the whole evidence as it exposed him being a corrupt. However, Tewkesbury managed to get him arrested in the end. Dare I ask, who is truly the villain in Enola Holmes 2; Lord McIntyre and Henry Lyod for the death of many girls; Grail for being a corrupt officer and murderer; Mira Troy for blackmailing and murdering?

The Adaptation Of Enola Holmes Movie

Sir Arthur Canon Doyle has amazingly penned Sherlock Holmes and his adventures. However, the feminist, strong and more intelligent Enola Holmes that empowers you is penned by Nancy Springer. Her novels and the true cases that show women empowerment are now Enola Holmes movies.

The recent Enola Holmes novel published was Enola Holmes and the Elegant Escapade in 2022. So far there are 8 novels and I am sure many, many movements we are unaware of. And if you are wondering if there will be Enola Holmes 3, then yes. However, the gap between the movies was of 2 years, so we might have to wait. And with Millie busy with Stranger Things season 5, and Henry Cavill occupied with the new Superman movie, we might experience a slight delay.

“Yes, absolutely. I would love to be a part of another one. I would love to see her do more cases, be put under pressure, be put in crazy situations, make her feel vulnerable again. I absolutely love seeing her back at work,” told Millie Bobby Brown to Screen Rant.

So brace yourself up and be ready for a lot more fun, adventure and way more mystery and puzzle solving.

SEE ALSO: Free the Nipple: History Of The Movement

Is Enola Holmes 2 Based on a True Story?

The last scene was truly powerful when Sarah and Enola barged into the factory and exposed the truth in front of more than 500 girls – “It ain’t typhus that’s killing us. It’s the phosphorus,” announced Sarah Chapman. “Be one voice” – Enola Holmes, thus began the thudding and marching out of the factory.

“The Match Girls Strike, led by Sarah Chapman was the first ever industrial action taken by women for women. It improved their working conditions for ever. It only takes one flame to start a fire.” This is the passage that reads at the end of the movie Enola Holmes 2.

So yes, Enola Holmes 2 is based on true incidents mixed with fictional characters. The real strike was much bigger and the situation was much worse than shown in the movie. However, it perfectly sums up the reality.

If you want to know more about The Match Girls Strike, here is the link to the truth.

What Is The Audience’s Reaction?

The audience have declared Enola Holmes 2 as the best movie of the year. The movie received a positive response from all ends and I completely agree with each one of them. It got released in India on 4th November, and in 5 days I have watched it thrice. Each time I feel a sense of empowerment and I cannot get enough of it. Millie Bobby Brown has done a commendable job on producing and being Enola Holmes. And obviously, again, a big thanks to Nancy Springer for giving us the best lady detective out there.

“You can’t control Enola Holmes. She’s a force of nature, a law unto herself” – Edith. Damn right Edith! We want more of Enola Holmes and her cases.

Have you watched it yet? If not, I highly recommend it to you. Drop everything, login to your Netflix, tuck in your blanket and press start. Yes, I am being pushy because it is indeed the best movie of the year.