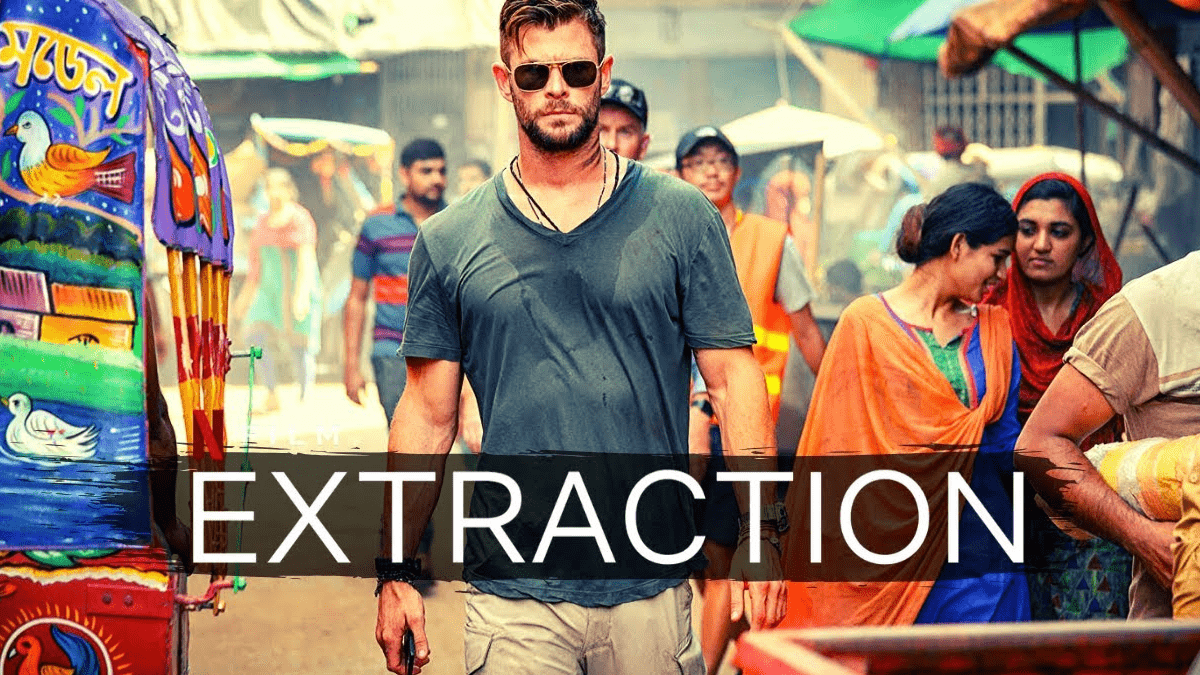 There is no reason for me to write this review because I can just say that I was tremendously distracted by the good looks of Chris Hemsworth. I would much like to become the human shield to save him from the bullets that were coming his way, I wanted to be worthy of Thor’s hammer to save him from the punches, and I oh-so-wanted for the camera to never pan away from his face as everything else seemed to get blurry.

The whole movie was a big portrait mode shot for my eyes as nothing seemed to matter other than Chris-the-beautiful-Hemsworth. I believe I have made it evident that this whole review will be a thirst-trap remix of how beautiful I think Mr. Hemsworth is, so we move on to the plot.

The Plot of ‘Extraction’

The trailer gives it away – there are two drug lords at war and a boy named Ovi (Rudhraksh Jaiswal) gets kidnapped. Tyler Rake (Chris Hemsworth) has the opportunity to save the boy from Bangladesh’s drug lord Amir Asif’s (Priyanshu Painyuli) grasp. Ovi is the son of the Indian drug lord Ovi Mahajan Senior (Pankaj Tripathi) whose right-hand man is Saju (Randeep Hooda). The Nick Fury to Extraction is Nik (Golshifteh Farahani), and I keep wondering the reasons behind such similar names

. Maybe it’s because of the debuting director Sam Hargrave who was the second unit director of Avengers: End Game and the producers and the creator of Extraction are the famous Russo brothers of Avengers (MCU) fame. The story was created based on an adaptation of a book that was written by the Russo brothers. However, who truly cares or concentrates on anything when Chris Hemsworth is there in the movie.

Ovi has been kidnapped under precarious circumstances, and now Saju was responsible to bring him back. Now, Saju has a family and does not want to be directly involved so he would much rather hire a mercenary and not pay (can’t afford) him to bring back the boy.

There are slight plot twists, which surely are no surprise with the trailers blatantly showing that Saju and Tyler fight at some point. So to deduce – Tyler is a good guy, Ovi is helpless, the Indian drug lord is Pankaj Tripathi, the Bangladeshi drug lord is the bad guy who kidnapped the poor boy, and Saju is there, might or might not be the bad guy. That’s it, that is the plot, and there is nothing much to the story than this. The slight background of Tyler is that he had a son, and now the son is not there – it’s also available for the viewers in the trailer itself.

Finally, paragraphs later, I will be discussing everything that I wanted to say about the movie which is Chris Hemsworth is beautiful, end of the story. Okay, fine, let’s talk a little more. The story of Extraction has nothing new to offer.

The plot is a device to show the strength of Tyler and the streets of Bangladesh in sepia tones, how Tyler extracts Ovi Mahajan Jr. from his kidnappers, whether they make it to the other side of the border, and also the role of Saju in the entire thing. Race 3 wins with the plot twists as the plot twists in Extraction is kind of predictable, as we have seen this happen over and over again.

At this point, I will pay someone who lives in denial that they have no clue how the movie is going to end. I am not sure if the Russo brothers got overwhelmed with the number of Indian artists, and that’s why Pankaj Tripathi has ‘literally’ nothing to do with the story, other than giving birth to Ovi and threatening Saju to kill his family if Ovi Jr. is not back home.

Female characters are null and void in the plotline and have nothing much to do other than blowing up choppers at the right time and providing important information, wearing over-sized clothes (although that’s nice for the sore eyes), and crying for their husband who must go out to ‘save’ the kidnapped boy.

Here’s a list of things that went a little sideways and of course, Chris Hemsworth and his glory.

1. The plot of Extraction is simple and no point in repeating the same as there is nothing much to add. But kudos to the director for the work and of course, the stunt directors as well, if they are any different from the ones I have named. The movie is a lot like a Virtual Reality game, where the stunts are unbelievable and simply wonderful to watch.

The extensive car scene that people are talking about is a spectacle to watch. The fights are unreal and just commendable work on that part. Especially, for people who are somewhat frustrated (by that I mean me), the action sequences and the bloodshed is almost cathartic. I mostly want to pull these stunts on the people disobeying the social distancing rules. It truly does no justice for me to ramble about the shots because of the lack of knowledge, and also it’s something to witness than read about.

2. Pankaj Tripathi is a lost potential for Extraction as this man is a miracle worker and his forgettable portion of a scene is not fair for a man of such talent.

3. I’m immensely glad that there were some ‘enemy’ forces portrayed as equally capable of dealing with the ‘hero’ of the movie and the bullets were not flying at random and not hitting the hero while each shot that the hero fires is a bull’s eye.

4. Amir Asif, the Bangladeshi drug lord has power and has the army at his disposal. As unbelievable as it sounds, it’s not truly unrealistic. He is good, acting-wise, but has very little to add to the fights as we expect in a Hindi movie.

He does not come into combat to save his mission to kidnap the boy and keeps it that way. He only throws tantrums at times and points at people to get the job done. During the climax, he has his binoculars to watch the city go into lockdown and perils to be thrown in the way of his mission, while he gives at max a single order to stop the mission of Extraction. So… meh!

5. Why is there no background in anything? Why was the boy kidnapped? What truly happened that under no circumstance must the Bangladeshi drug lord let go of the kidnapped son of the Indian drug lord? I want to know, just to understand why the conniving drug lord would want to stop the whole city just to keep the boy from returning home?

We only get a glimpse of the insecurities of Ovi and also the back story of how Tyler lost his son and that’s about it. Well, I understand that in reality no one truly has time to exchange stories while they are being shot at, but then I am a Bollywood baby, and I need my plots to better understand. You know what I mean!

SEE ALSO: The Role of Women in Hitchcock Films

6. I thoroughly enjoyed the fact that a Bangladeshi drug lord, or the Indian drug lord and his ancillaries of human soldiers are not speaking in English while communicating with one another and would rather stick to their mother tongue. Do you understand what it did to a Bengali when she heard Bengali abuses being hurled out of the characters’ mouths in an international movie? You don’t get it.

7. The female character of Nik… I mean, she began as a robot and then gained some emotion at the very end while in between she just shot missiles and looked stiff. Maybe her briefing went something like this: “Speak only when you’re asked to. Do not emote. Stand like a robot. Be the replacement of Google Maps. Wear a black widow-esque costume”.

8. Saju a.k.a. Randeep thank-god-for-mankind Hooda is forgettable-ish unforgettable for the movie. I mean he is no Irrfan Khan from Jurassic World who dies almost immediately as there is character development in a plane crash, but he does not add much to anything. His good looks are charming but he ends up looking like a grizzly bear (in the right kind of way), with a bad sunburn.

I genuinely wanted to put some sunscreen on his face throughout the movie. His acting is impeccable but not something you would want to remember when thinking about Extraction. Also at some point, there is a Harry Potter reference (or my brain just went there) and let me know if you find it.

9. Ovi or Rudhraksh Jaiswal is a sweet boy and is more like a Louis Vuitton handbag at a flea market. Impossible to ignore, but the character is very out of place. This might be because I had absolutely nothing on him to make me think that the boy is of true essence for Asif and he cannot lose him.

You know that you cannot ignore the L.V. handbag because it’s right there on your face but you do not want to approach it because a. the hawker might know it’s worth and ask for a high price and it’s a flea market, you are not paying more than a 100 bucks for it, b. the hawker might not know the worth of the bag and the atrocious pricing will be disappointing for you.

10. Eleven’s dad is alive? David Harbour who plays the character of Gasper is conveniently living in Bangladesh at the moment of said Extractions and of course, Tyler saved him once due to which he has to save Tyler’s life as he is indebted to Tyler. Okay, next…

11. I will bring some popcorn and discuss Tyler Rake… Where was I? Yes, remember fat Thor, the one with depression, and you despised looking at the demi-god thinking about how otherwise beautiful Chris is and you would like for him, in all his glory, to come back? I had the opposite reaction in Extraction. I wanted fat Thor to come and play the character of Tyler Rake as anything else other than the chiseled body of Chris Hemsworth was pointless to look at. God must have taken a lot of time while creating him.

12. What is with the fashion statements by the Bangladeshi people though? If you are Indian, you are supposed to wear something gaudy and colorful that can blind someone. I mean there are Indian designers in America. Just saying!

Listen, what do I know? I am just a girl, sitting in front of her laptop, drooling over Mr. Hemsworth. In the plot we have witnessed several times, the action sequences are noteworthy. Bajrangi Bhaijaan did it first, and I am kidding.