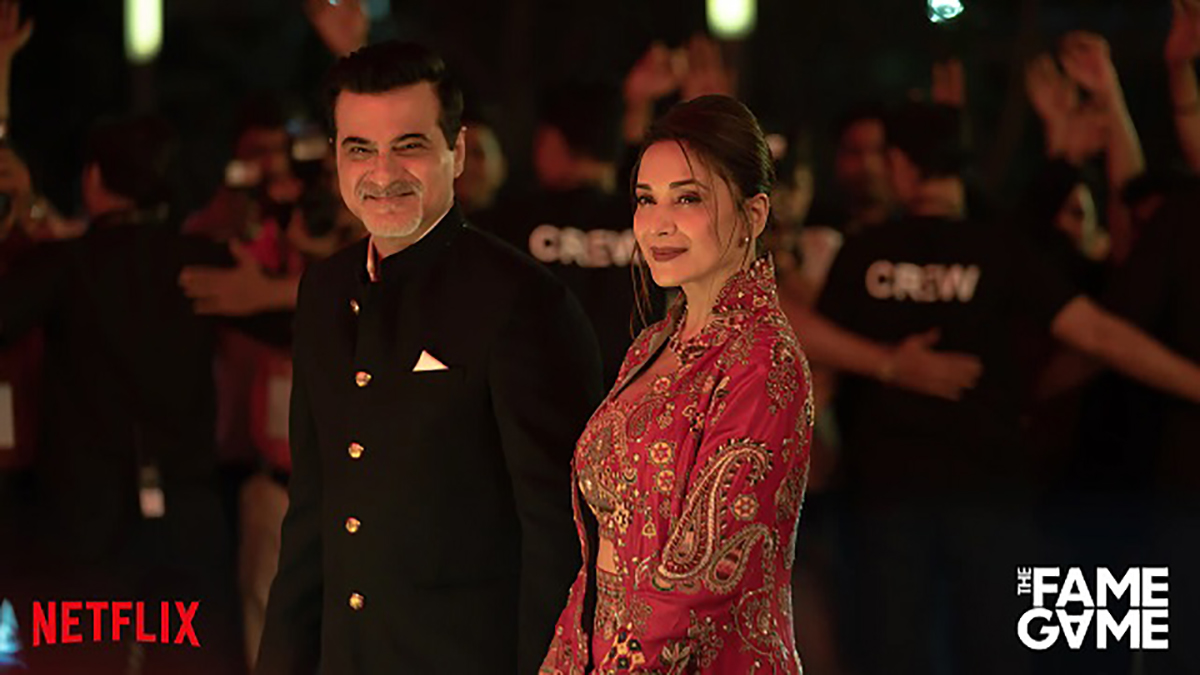 To answer this question, I actually watched the show with utmost attention first, then began writing. Curiosity, huh? So, is The Fame Game worth the watch? No, I won’t tell you the answer instantly. Else why would you read my rambling? Thus, begin the game of review.

Drama, mystery, and thriller, this Indian series begins with the disappearance of a famous actress Anamika Anand. One by one, each character’s story is unfolded during the investigation. Murder or kidnapping – Nothing seems to be clear. Who had the motive for committing this crime, or did the actress leave by choice? Fans show their love through candle marches and social media handles.

Are you ready for some spoilers to unfold about this mysterious vanishing of Anamika Anand?

The Role Of Characters In The Disappearance Of Anamika Anand

The Fame Game revolves around Anamika Anand or Vijju Joshi (her early life name), played by Madhuri Dixit. She is a mother of two children, wife of Nikhil More, played by Sanjay Kapoor, and daughter of a cold-controlling mother, Kalyani, played by Suhasini Mulay. Anamika is a famous actress whose fans are just crazy about her. Her thousand-watt smile and loving, helping nature are what she is loved for. She is known to be the only actress in the industry to have stuck around for almost 30 years.

Notice the word play when I said she is a mother, wife, daughter, and actress. This means during the series, her own identity was nothing but these roles.

Nikhil More, a film producer, is shown as a physically and verbally abusive husband. His ego takes over his mind for the very reason that he is living off his wife’s hard-earned money. His character is portrayed exactly how many regular men are and proves that celebrities, too, go through similar issues as we do.

Kalyani, Anamika’s mother, controls every aspect of the actress’s life, including finances, career choice, and even her partner. In each episode, you will not see Kalyani shedding a single tear after her daughter goes missing. She is only concerned about her reputation and money.

Amara and Avinash, Anamika’s children, deal with the same issues as any ordinary children. However, the burden heightens when it comes to keeping their reputation intact. Amara is a college girl, while Avinash is taking a break to figure out what he wants in his life. He refused to join the family “filmy” business and later revealed he wanted to learn music theory. Amara says she wants to be an actress, just like her mother.

SEE ALSO: I Have Dealt With Voyeurism

What is The Fame Game About?

Through the little character introduction, you do understand that we are going to talk about a celebrity’s “dysfunctional family.” The story begins with the sudden disappearance of the actress Anamika Anand. Each character is a suspect, especially the husband, Nikhil More. The world sees the family as one fun-loving, stable home. However, the truth reveals the darker side of each member and connects the dot to the theory of Anamika’s sudden drop out of sight. To keep the audience engaged throughout, the story swings and covers between the past and present.

You have to be patient to enjoy the suspense. Anamika’s husband is producing a film starring Anamika, but she feels threatened by the new generation of actresses half her age. The actress points out that she lacks chemistry with the young co-actor in the film and advises replacing him with Manish Khanna. She told him her fans loved to see their on-screen chemistry. She assured the movie would turn into a blockbuster. Nikhil considered this, and the very next morning, the two went to Manish’s place with a proposal that he instantly accepted as respect to their old friendship days.

She finds herself falling for the old lover Manish who she had to leave 20 years ago because of her mother. It felt like fate reunited them. But she falls in a difficult position as she sees herself as a mother, wife, and daughter. She has to fulfill these roles simultaneously, giving her significantly less time to understand and deal with what she truly wants.

Further, the episodes reveal many clashes between the family members. Starting with Avinash’s attempt to commit suicide, Anamika met her crazy fan Madhav for the first time.

Who Kidnapped Madhuri Dixit in The Fame Game?

Anamika starts to find Madhav almost everywhere; in a wheelchair when he faked being handicapped, dancing to her song on the road, among the crowd, and later even in her vanity van. Ahead in the episodes, Manish is shown romancing Anamika. And Billy, her makeup artist, and brother-like, completely supports her decisions telling her she needs to do something for herself. To him, she looked happier and calmer with Manish. He was aware of the domestic violence at home.

As the story falls back into the past again, Madhav turns out to be an even bigger stalker who clicks Anamika’s and Manish’s pictures together when they are meeting ‘secretly’. He entered Anamika’s vanity van and threatened her to listen to him. He told her she was his ‘ai‘ (mother). She played along to calm the stalker down and agreed to meet him at night.

The reason why Avinash tried to commit suicide was that he was gay. He was afraid if anyone found out, especially his friends, no one would accept or love him. He disclosed this detail of his life only to his mother and asked her to keep it confidential. So, when her son’s sexuality is revealed to the media, she is astonished. Anamika took Billy’s help to get the photographs back, but she learned a dark secret about him. Billy revealed her son’s sexuality to the news reporter Pappu which leaves her heart broken.

Let’s talk about Amara a bit. Amara was self-conscious. Her grandmother, Kalyani, often body shamed her. Amara started hating herself. She had an emotional breakdown when she learned her friend got a call back from a casting director, and she did not. Her video went viral on social media, which resulted in another breakdown. She told her mother she had finalized the decision to become an actress because she no longer wanted to be herself.

You will find Amara absolutely naive. When Anamika disappeared, Amara first met Madhav during a prayer ritual. She gets drawn toward him and trusts him to help her find her mother. But in reality, she was loving the attention she was getting from him. She is unaware of the fact that he was a dangerous stalker who threatened and blackmailed Anamika.

This thriller series is not without loopholes. Ahead, Madhav kills Billy for trying to search for him. He believed that Billy blamed the actress’s disappearance on Madhav.

Shobha Trivedi, the investigating officer of Anamika’s case, is constantly digging for information and comes across the financial condition of the so-called wealthy celebrity family. Later in the series, it is revealed that Anamika’s mother and husband lost all the money in betting. Due to their negligence, they even lost the house to the bank. Nikhil was planning to sell the house to a rich family and settle elsewhere. But the actress was not ready for the same. She had other plans.

Was Madhuri Dixit Alive in the Series?

We see Anamika in a small hut in a field. It seems that Harilal, a painter had abducted her. The family members blame each other for her disappearance and remember what each one did to hurt her. The flashback reveals Nikhil hit Avinash for being Manish’s son. Yes, Avinash is Manish’s and Anamika’s son, and Nikhil got to know about this through Kalyani during an argument. But Avi thought that his father was beating him for being gay. Maybe!

The police finally reach the hut where Anamika was kept and finds her blood. The media took the chance to call it a murder-suicide case as Manish commits suicide thinking Anamika is dead. It was a heart-wrenching moment. I have a soft corner for Manish. He dealt with bipolar disorder, and it was only Anamika who kept him calmer and stable.

Avinash reveals to the media that his father is responsible for the disappearance of his mother as the piece of land belonged to Nikhil More. He said that the night Nikhil found out Avi was gay, the same night, he threatened to kill him and Anamika. The police arrested the film producer. But due to a lack of evidence, he was released. Plus, before committing suicide, Manish took the blame on himself. The investigating department started to believe it was all Manish’s doing, and Nikhil went free.

Only Shobha cracked the case, but again, she had no evidence to prove that Manish was not the murderer. The officer also believed that Anamika was still alive and someone trusted within the family was helping her plot this case.

What Happened To Anamika in The Fame Game?

SPOILER ALERT! In case you do not want to know the end, don’t read further.

The last episode reveals the whole plan. When she was comforting her daughter during a breakdown, she made a plan to escape. She knew her getaway would make her fans go wild. That will make the movie sell more than the rival actress’s film as the release date was clashing. This will secure her children’s future, the family will be debt-free, and Amara will get her breakthrough.

Shocking? Isn’t it? What’s more surprising is that Amara fits right to become an actress. She lost herself in the whole plan, and no one could suspect she was also the culprit. Now here comes another twist. When Anamika was all set to come back with a grand entry, she told her daughter she would put the whole blame on the stalker, Madhav. Amara revealed she was in love with him and finds him innocent. The actress was taken aback and disappointed. She refused to partake in her daughter’s romances.

In the end, Amara is shown walking out of the abandoned factory, giving Harilal the instructions to keep her mother there forever. She finally became an actress when her father promised the audience to launch his daughter in one of his upcoming movies.

Is The Fame Game Worth The Watch?

What you predict will not be their next move. This is why I loved the series. However, I was disappointed with the end of The Fame Game. Anamika had gone through so much since the beginning. But life played tit-for-tat with her when she slipped once to help herself and her daughter. It was a sad revelation. Manish’s death was even more tragic. It’s like Anamika’s destiny had taken the down escalator.

So, if you like a thriller that will leave you questioning the truth in each episode, The Fame Game is worth watching. But if you do not have the patience to wait for the grand twist, I would still advise you to give it a try.