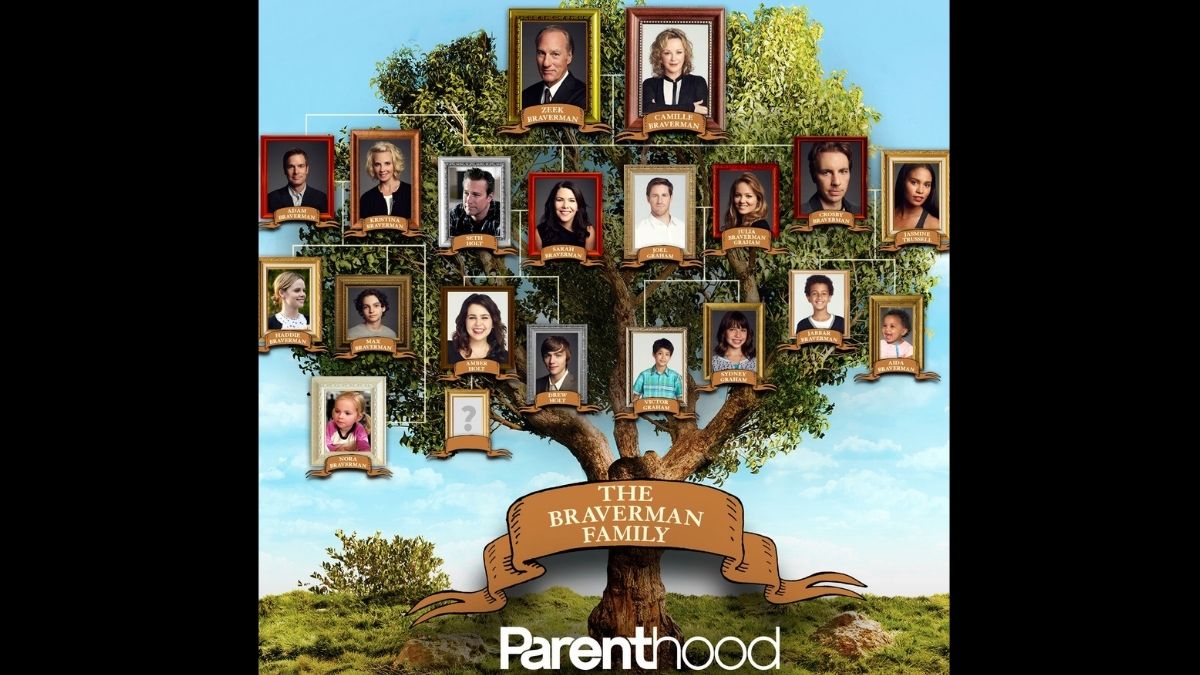 Parenthood is an NBC drama-comedy series that ran for six seasons, from 2010 to 2015. At the time it premiered, the show didn’t receive as much traction as it did after it ended, as more and more people discovered this gift of a series.

With heartfelt performances from phenomenal actors like Lauren Graham, Good Girls fame Mae Whitman, Dax Shephard, and Craig T. Nelson, the show follows the journey of the Braverman family as they navigate through life, work, friendships, and relationships.

Since families and parenting is a universal topic, the show is naturally relatable to its core concept. We all understand what it is like to fight with family and navigate how to care for someone you love unconditionally.

But Parenthood strikes a chord in our hearts because it is realistic and raw. With familial love, comes a lot of responsibility, hurt, and pain. Families fight, say hurtful things, and turn their backs on each other sometimes, but no matter what, they always come back. The show identifies that and portrays it accurately, digging deep into its complexities and hardships.

Every character will be representative of either you yourself or someone you know. There is a lot of depth to them and through the span of six seasons, creator Jason Katims breaks down those layers and shows the characters in their most vulnerable form. There is a reason that every episode makes you cry. It’s because you connect to the pain, the happiness, the wins, and the losses.

With every infuriating turn the show would take, putting its characters in pain, showing them at their lowest, it would make another one for the better, with the reassurance that they have each other to love, support, and care for no matter what.

Through all this, Parenthood manages to impart a lot of learnings. It explores all the different perspectives on family, allowing the viewer to understand lived experiences of other members of their family.

Parenthood shows the life of four families, each of a different Braverman sibling. The two brothers and two sisters have a close connection and turn to each other in times of crisis. They give out advice and help out financially. They also take care of each other’s kids and always show up to express their support.

But these siblings are not always on good terms. There are ugly fights and hurtful words, ending in meaningful reconciliations. These will be enough to make you call your siblings and tell them that you love them.

Having known each other so well, they also sometimes are the only ones giving the other a reality check. For instance, Adam and Crosby, the two Braverman brothers, embark on a business together because it is Crosby’s dream. Adam, being the supportive elder sibling, agrees to venture into it with dedication. Eventually, the business starts to fail and Adam is the one who calls it quits. Crosby then has to quit on his dream even though he doesn’t want to.

That might seem harsh, but the show deals with it well. In supporting each other, they can’t turn a blind eye to their own responsibilities. Adam does Crosby a favor but he can’t keep going on, which Crosby understands even though it requires him to make a huge sacrifice.

Parenthood reminds us that though a family is bound with each other, they also need to operate as individuals. The show also delves into the ever-evolving relationships between siblings. For instance, that of a sister and brother who struggle to find common ground after the latter gets diagnosed with Asperger’s Syndrome.

Even in such situations, the show doesn’t let resentment grow. They give us a slightly overoptimistic, but perhaps hopeful arc for families going through the same.

Parenthood shows parenting to be more than the gratifying ordeal it is known to be. They make us sympathize with Kristina, a mom who finds herself dealing with the difficulties that come with her son’s developmental disorder. Having no prior information about it, she and her husband give it all to understand it and help their son. Throughout the show, they constantly face challenges and brave through them, making sure their son doesn’t get left behind.

While this is what most parents would do, it is still something you never get to see unless you are facing it yourself. From the outside, you can never understand how hard it is. But by shedding light on it, Parenthood gives us a glimpse inside homes like these where every day can be a struggle, making the small victories feel all the more rewarding.

Zeek, the oldest Braverman, once said on the show that parents are bound to mess their children up in some way. That sentence stayed with me and the show helped me understand it. Naturally, no parent is perfect. They mess up, and sometimes their children have to bear the brunt of their mistakes and imperfections.

There is a lot that children take from their parents, things that they subconsciously register in their childhood, which then gets stemmed in their identity as an individual. Because parents and their children’s lives are so intertwined, there will be some ways that they rub off on each other, both positively and negatively. But that is okay. What matters is the love you give to children, even if you aren’t always the parent you strive to be.

Parenthood touches on topics of separation, divorce, and infidelity. The couples struggle with navigating how to make their children feel loved when their own relationship goes through a rough patch. They also sometimes feel the need to keep their marriage afloat for the sake of their children. What matters, in the end, is that the relationship remains healthy. It is impossible not to rope in the children when their parent’s relationship breaks or faces problems.

For instance, Crosby and Jasmine constantly struggle with defining their relationship with each other. This leaves their six-year-old son confused and upset, something the parents find hard to deal with. They don’t want to leave him in the dark, but they also don’t want him to feel disappointed because of their rocky relationship.

What is interesting is how the show stresses the fact that children do sense the complicated things their parents are going through and sometimes, the best thing to do for them is, to be honest. Because while they might not understand the intricacies of a troubled marriage, they will know what is needed of them.

SEE ALSO: The Best Episodes Of The Master Of None Series

The show also touches on how parents sometimes choose the responsibility of taking full-time care of their children over their individual aspirations, and sometimes they don’t. Either way, they end up feeling like they are missing out on something.

For instance, Julia, a lawyer, works in a very demanding job that not only exhausts her but also eats up most of her time. As a result, she spends less time with her daughter, Sidney, who feels closer to her father because he stays at home with her all day. Julia feels guilty and incapable, making her feel unfulfilled in both her career and as a parent.

On the other hand, Kristina, who left her job to stay at home every day to take care of her two children, misses work. When her daughter seeks Aunt Julia for career advice, Kristina feels dismissed because she wants to be someone her daughter looks up to. She also has something she feels passionate about and as the show progresses, she goes on to fulfill those dreams. However, in those later stages, she worries about neglecting her children. And the cycle continues.

A lot of parents, especially mothers, will relate to these problems because they had to grapple with these issues. These arcs are specifically meant for parents to see that these personal conflicts are universal and they are not in it alone.

You Can’t Choose Your Family!

The members of the Braverman family aren’t always happy with each other. But that’s the point of a family- you can’t choose one. You have what you get and you have to make the most out of it. Sometimes the home you are born into is your family and sometimes your group of friends; it doesn’t matter who your family is as long as they are people who love you.

You can stream all six seasons of Parenthood now, on Amazon Prime and Netflix.