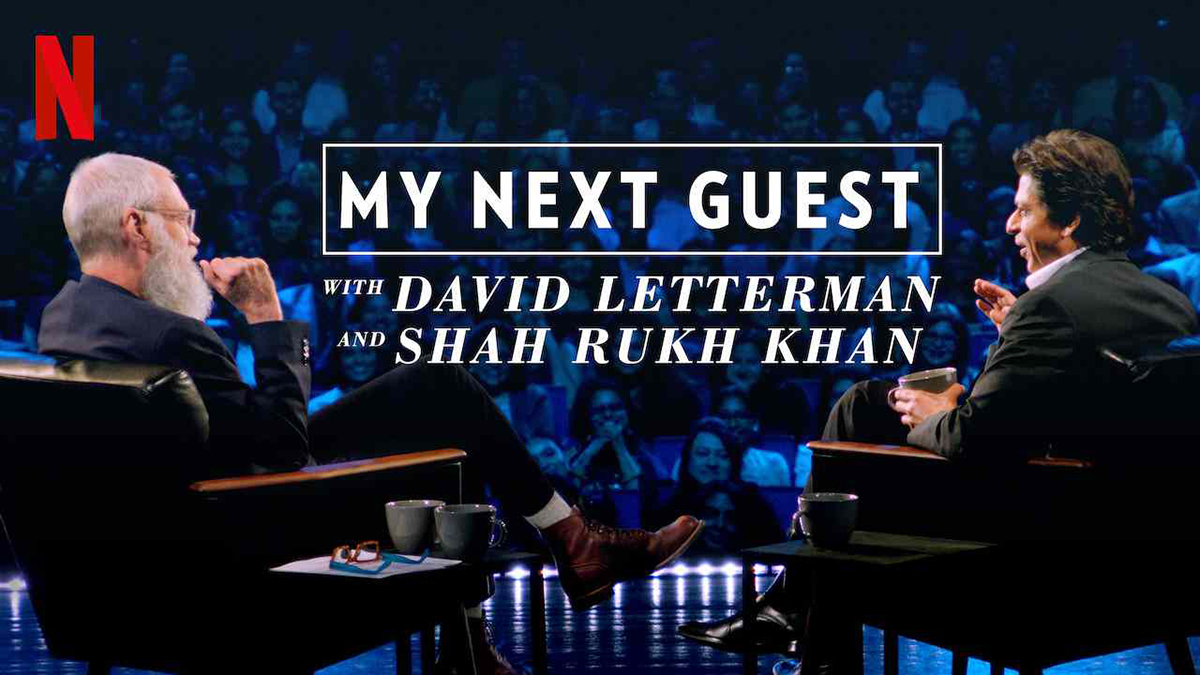 Now, this is a Diwali bonus we truly needed- “My Next Guest Needs No Introduction with David Letterman” and Shah Rukh Khan. There is a sense of unrequited love when I think about Shah Rukh Khan. It is no surprise that 3.5 billion people love him, and well, I am one of them. Now, the thing is, I tell everyone that he is my husband, and I am kind of not ashamed.

Let me shine a little light on my personal life (since I am at that ripe age of “you should consider getting married” talk from your parents). I oppose the whole institution of marriage because it baffles me to even think about it. Still, I guess Shah Rukh is the only exception to the entire scenario. And I wholeheartedly accept him, although he has no clue who I am.

Considering all this, I must say that when “My Next Guest with David Letterman and Shah Rukh Khan” was announced, I flipped a lot of things (decent exclamation as my parents are not aware of the fact that I curse and they read each and every word).

It is just an honor to have David Letterman interview Shah Rukh Khan for all of us. The announcement did not shock me. We have spoiled our SRK with our love and he is famous all across the world. His accolades aside, he can just come and stand on screen and light it up with his wit and sheer presence.

Well, it should not come as a surprise that the whole article will be immensely biased and incredibly prejudiced because I do not see a reason why it should not be. The interview is a light-hearted take on all that we already know about Mr. Khan and a little more.

Moments on the Show With David Letterman and Shah Rukh Khan

We know how he is revered in his field and how far he has come. So, we are not shocked to hear about his background, and I will spare the details. What I cannot let go of is how incredibly witty he is. The way he owns the show even though David Letterman is sitting inches away from him. And how he fulfilled out “Mannat” to show a snippet of Mr. Khan’s life and also his house. (Notice the wordplay?!)

It is usual with the Interview. Shah Rukh Khan’s fans are going crazy. When Mr. Khan came out in his white Pathan suit, I could not stop ogling him. THANK YOU, NETFLIX! Mr. Khan spills a little about his family and shows off Abraham like the proud father. He explained how Abraham asks Mr. Khan to make a funny nose with ketchup. Now that made me cry (totally over-dramatic).

But the incomparable introduction, which was a play on “He needs no introduction” by Letterman, has our heart. He just went speechless, and all over the world, people waiting to see Mr. Khan went- “Same, Dave, Same!”. Oh, did I mention that Mr. Khan was cooking for a bit, and Letterman tried to pretend to have injured himself? Then SRK schooled him a little about a thing or two about acting. I felt it when David said something along the lines of how he can give good advice but can’t figure his own things out. And SRK rephrased the same line in accordance.

Loving Moments on the Show

He spares no detail by stating that Aryan might not be as interested in being an actor as Suhana. SRK also spilled the fact that Aryan hates having to participate in the “boy talk” conversations with Suhana. He even buys presents for the boy. And I am here wondering what my brother has ever achieved in his life (my brother possibly, does not even care, and Suhana is like a little baby compared to his age).

Here is a shout-out to how incredibly he had spoken about death and then his love life. He said, “I think death is extremely beautiful and alluring” while explaining to Dave about his mother’s death. He explained how he wanted to keep her dissatisfied with the world as he had this whole theory about how people won’t die if they are unhappy. It’s just enticing how this man has a poetic point of view regarding death.

Then came the love story where he went from one beach to another in search of his estranged girlfriend with 400 rupees and found her, almost like in his movies. And, I am here like, I can’t even find my glasses, and what is a boyfriend?

Gauri was introduced for a bit, explaining their life and children and her part of the story. Oh boy, did they mention Fan and DDLJ, and people went bonkers? Let me point out one thing. Best of all, there was a time when Mr. Khan looked at Gauri with the kind of eyes that made me fall in love with him all over again.

That little kid, who would only eat if one of SRK’s songs were playing, came out of me and swooned over him for a very long time. If I could make it my screen-saver, I would.

Highlights From The Interview of Shah Rukh Khan

There are a lot of things that Mr. Khan is, but he is not humble about a lot of things. Here are a few brilliant takeaways from The interview itself that made him the King of this Interview:

Quickly, I would like to highlight that I have the same cup (not the same cup, a look-alike) that SRK was drinking from throughout the show. I wrote it, and I realized that this has nothing to do with how SRK owned the show. But it makes me feel so special and connected with my favorite.

In conclusion, I would like to say a few things, as this is as close to writing a formal letter to SRK as I will get. He is truly an enigma. Faltering and making mistakes along the way, but still surviving and repeating the mistakes to maybe create that masterpiece through all his failures.

He inspired me at a very young age. He stated that he wanted to own the plot of land where Mannat is, and then he owned it. I share his birth month. And although I do not want to sound cocky, I share some of his qualities, which SRK has openly spoken about in his interviews.

I have been in love with him for the longest time. But I will never call myself a ‘fan’ (that is not the word that resonates with my emotions towards him). I have no qualms in stating that there are several influences in my life, especially from the world of movies. But none like Shah Rukh Khan.