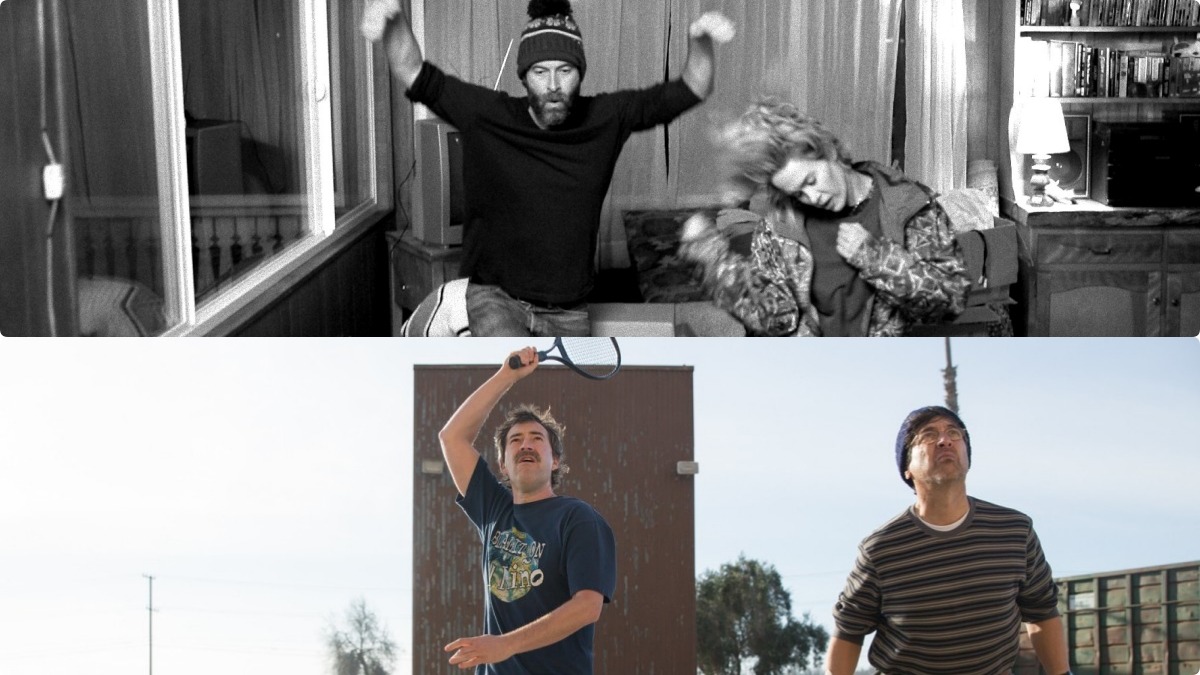 Right so, here’s a general question: have you ever done a double-movie day on Netflix? I’m guessing it’s a possible “yes,” considering we’re now in the age of streaming and marathoning (and work-from-home)—an age where anyone can pop in two (or more) movies a day.

Here in FilmSpeak, let’s dive into some films that could make a great double-billing on your next Netflix binge. We’re picking the Netflix films Blue Jay (2016) and Paddleton (2019) in this article. I’ve already seen these films earlier this year separately, but rewatching them together during my recent Netflix binge was a unique experience.

Both Blue Jay and Paddleton are films directed by Alex Lehmann and written by noted indie actor Mark Duplass— see the running theme? Blue Jay is Lehmann’s debut feature and first collaboration with Duplass. Starring Duplass and Sarah Paulson, it’s a romantic drama about two former lovers meeting each other randomly in a supermarket, sparking an impromptu reunion.

Paddleton is Lehmann’s second feature and second collaboration with Duplass. But this time, it’s a road movie starring Duplass and Ray Romano. Here, Duplass’ character is diagnosed with cancer and begrudgingly decides to have euthanasia. His neighbor/best friend, played by Romano, spends time with him before his impending due date.

Both, as you can see, have incredibly simple premises— with maybe even predictable endings. Both are structured in the traditional three-acts, with nothing experimental there. But it is in the execution where they show their specialties.

So Let’s Dive in on These Netflix Gems!

Shot in black and white, Blue Jay takes the 24-hour plot approach of the Before Trilogy. It’s a series of scenes of two former sweethearts reconnecting. It’s a relatable feeling, that reunion with acquaintances (regardless if platonic or romantic). And its relatability is one of the charms of this film.

Lehmann takes a grounded approach in his directing. And with Duplass’ naturalist writing, they made scenes with a Cassavettes-like intimacy and intensity (as if the black-and-white wasn’t enough Cassavettes-esque). It’s a compelling series of character studies and drama.

Mark Duplass and Sarah Paulson make such a great couple together. Their chemistry is incredibly strong and infectious; it makes you want to know more— watch more— of these characters.

Lengthy conversations about mundane things evoke so many feelings of nostalgia and reconnection. It’s that feeling when you have a reunion with high school friends, whether planned or unexpected, and you noticed you all changed as people. Despite not talking about much, there’s so much change underlying it all.

It’s not all talky too. Silences fill Blue Jay too. And it’s in this quietness that allows us, the audience, to reflect on the characters—building up the impact of its climax.

This is a less-is-more film. Its simplicity and short runtime match its theme of a fleeting instance of romantic nostalgia without going overly sentimental in filler fluff. Its minimal approach lends to a balance of naturalistic conversations and brief quiet.

And the music score is excellent too. It’s one of the most underrated aspects of this underrated film. The lush piano and pads of composer Julian Wass enhance so much of the nostalgic tone of this film— Anchoring shots of Pacific Northwest bliss.

Much like Blue Jay, Paddleton also has the same level of relatability and warmth. But this time with more ponderous themes and subject matter.

Like Paulson in Blue Jay, Duplass’s chemistry with Ray Romano in Paddleton is endearing and heartfelt. Scenes of platonic hangouts feel genuine, and scenes of shattering news and challenges feel heartbreaking. And it’s these two’s performances, especially from Romano, that make this film an emotional rollercoaster.

Everything feels grounded in its sense of quirky and heartbreaking realism, from the affectionately named game the protagonists call Paddleton to confessions of illness and regrets.

Its central theme of mortality is an extremely haunting idea in itself. But it’s a risky theme to tackle. It can be done with such melodrama, ruining a film’s intended grounded feel. Luckily for Paddleton, Lehmann’s direction and Duplass’ writing manages to ground this film in their style of quirky realism, making their exploration of mortality easy to digest in its warmth— or complex, depending on if you can stomach realistic drama in films. And like Blue Jay, it doesn’t go overly sentimental and phony in its emotions too.

I do have this one problem with Paddleton. Its first and third acts— the parts of the movie where it’s mainly in an apartment— feel so intimate, and human and match the uniqueness of the film’s premise. Whereas the second act in a motel felt like a generic road movie, derailing a lot of its pace. It isn’t bad, but the uniqueness feels non-existent in this part of the film. And it still felt like that on this recent binge. But I’m just nitpicking at this point; this gripe may be a treasure for others.

Both films’ relatability is what makes these films an excellent pairing for each other. One’s a warm blanket of fleeting romance and nostalgia, and one’s a warm exploration of the strength of platonic relationships. Both are candid, heartbreaking, and quirkily melancholic. And most importantly, they’re just real! There are no melodramatic pretensions whatsoever. They make a great pair together.