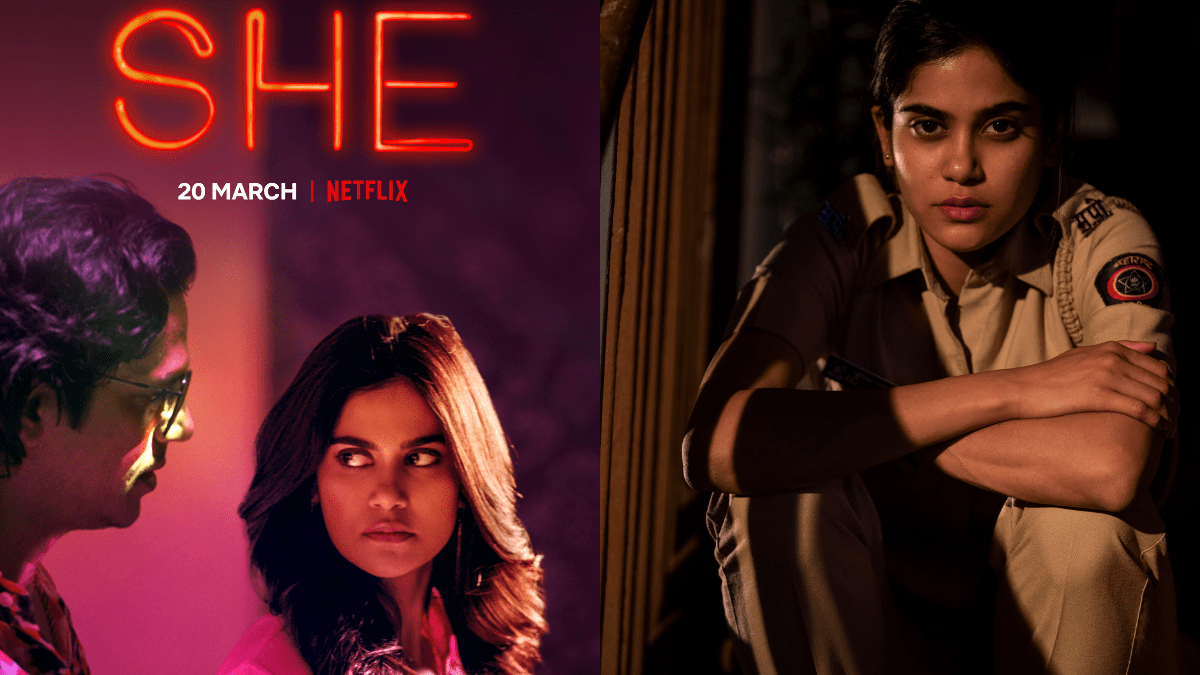 There is a little bit of voyeurism in all of us and I believe something sparked in me when I started watching ‘She’. Have you ever been in love with someone, and then you saw that person change over a course of time and you suddenly cannot connect with that person? That was my reaction to ‘She’.

Hear me out, I am not saying it is a bad show, I think it’s actually interesting, but my relationship with anything Imtiaz Ali is very volatile and very vulnerable. I do not want the volatility of my relationship with Imtiaz’s content to fade away.  My disappointment arose from the fact that although I was well aware that the creator is Imtiaz Ali, I became ignorant of the fact while watching the show.

The Police Constable Bhumi (played by Aaditi Pohankar) portrays the character of somebody who is not “femininely attractive” and very uncomfortable with her sexuality. She discovers herself and her desires while she goes undercover to attract the attention of some gangsters. She is unable to satisfy her husband- Lokhande (played by Sandeep Dhabale- who is a dead ringer of Ashutosh Rana) who says that the only reason that a man gets married to a woman is not to have a “sukhi” life. Yikes!

According to ACP Fernandez (played by Vishwas Kini), Bhumi is the only choice for such an undercover mission because she has the perfect physical appearance to be a hooker and yet she is not feminine and has no friends other than a mother and a sister. With Bhumi’s help, Mumbai Police gets hold of a low-life criminal Sasya (Vijay Varma) and from there on it’s a story about how the gangsters are planning a big heist about a mystery man- Nayak (played by Kishore Kumar G).

I will not speak much about Nayak, as it is a mystery, but there is something so earnest about Kishore’s acting. I felt love, adoration, and almost sympathy for the anti-hero (loosely speaking). He is the leader of the cartel and there is not much to discover about him, he is the bad guy, he is smart and he is also brilliant and stuff that we have already come across. But, it’s how Kishore plays the character that makes all the difference.

Now, coming to the prime part, the ‘She’ of the story- Aaditi Pohankar, she is interesting. She plays being uncomfortable, very submissive, and also expressionless at times. But I think that is for the right reasons. She transforms from this passive character to someone who is very confident, but it felt like something is missing when she actually crossed that tunnel and became a “monster”.

Fernandez is flawed but his character is very confused. He is supposed to be intelligent, not irrational, which his character was for the most part. His character is like the flickering light trope in a horror movie, just a convenient part of the puzzle, for whom most of the things happened. I am not saying he was bad, but there could have been more flesh to his character.

Let’s now just talk about the best thing to have happened to ‘She”- Vijay Varma. Oh my God! In the first episode, he gets caught because of Bhumi who poses as a hooker to trap Sasya (this is not a spoiler, Netflix’s description has this information), there was this reaction on his face of awe, disbelief, and joy at the same time and it’s a moment that gave me chills. Vijay Varma is like the breath of fresh air amidst the confusion of the plot-line of the show.

My Honest Take on ‘She’

The story is not flawed, I could get what the plot point wanted to convey, it is just a little confusing.  Arif Ali and Avinash Das, paint the image of an atypical woman in great light, although the same cannot be said about the color scheme of the series, as it is shot in a dark environment and in the grainy screen at some points.

Vijay Varma is unbeatable at his game, and I cannot imagine this show without Vijay at all. His first appearance got me hooked on this flawed and very cunning character. He plays the character of a slimy person who has no loyalty and wants to beat the woman who got him caught. He is so fresh and like a cool glass of lemonade on a hot, humid day. Yes, that is the only analogy that came to my mind.

Aaditi on the other hand is also incredible, and I can imagine how uncomfortable she must have been while shooting for the series, but at times she was a little bland. When the climax came and she had to emote the most, it was like the white noise of all expressions.

Then there was Kishore. I don’t know if my friend (who asked me to watch this show) and I are so deeply attracted toward damaged love, is the reason why I fell for the character of Kishore, or is it because he is simply amazing in portraying the character of Nayak?

‘She’ is amazing in parts and confused in others. There are some loose plot points that do not tie up in the end. The whole husband angle goes nowhere and I would have loved it if Bhumi gave one punch to this man or at least said one bitter word to him. Also, there is a whole discovering one’s self angle which was lovely and refreshing until it was dragged a little.

Fernandez’s character needs some salt. He is perfect as it is, but he is not the pillar of the scene and I would love to see something else in his character that just gives him the edge. He is like the perfect combination of a blue shirt and brown shoes, but somehow the shoelace is pastel.

My letter to Imtiaz Ali

Vijay Verma is flawless. There has to be a part two and I will be looking forward to it.

Sir, my relation with your movies is like the scene where Tara and Ved are sitting under the tree and speaking about their relationship, in Tamasha. They speak about how intangible their feelings are towards each other and although they are close (in proximity) to one another, nothing can happen between them. You have painted a picture of my life with scenes that I could never explain in words.

I have never been bothered much about the commercial success of any of your movies, but they have been a part of my life on sad days. Unimaginably if one sad day when I have not watched a movie made by you. I think I have seen Jab We Met at least 1000 times because that night in Ratlam is my dystopia in the utopia that I keep visiting in my dreams. And I have felt Majnu’s eccentricity in my heart and Laila’s emptiness in my soul. I thank you for painting a picture of my emotions.

There was a time in life when I felt the void in me because of the monotony of my life, and I felt something shift in me like Ved. I did not understand the movie, the first time I saw it to be honest, but as life got complex and as my soul stood at least a kilometer away from my body, I felt the heartbreak. All I want to say is remember when Ved told the story of the mediocre boy who became a machine just to fit in and wanted to break free of the rat race, never let your content be a part of this rat race.

3 thoughts on “Netflix’s She Is Not Your Regular Imtiaz Ali Content!”