Skip to content
Home  »  Pop Culture   »   Never Have I Ever: 10 Times We Rooted For Devi Vishwakumar 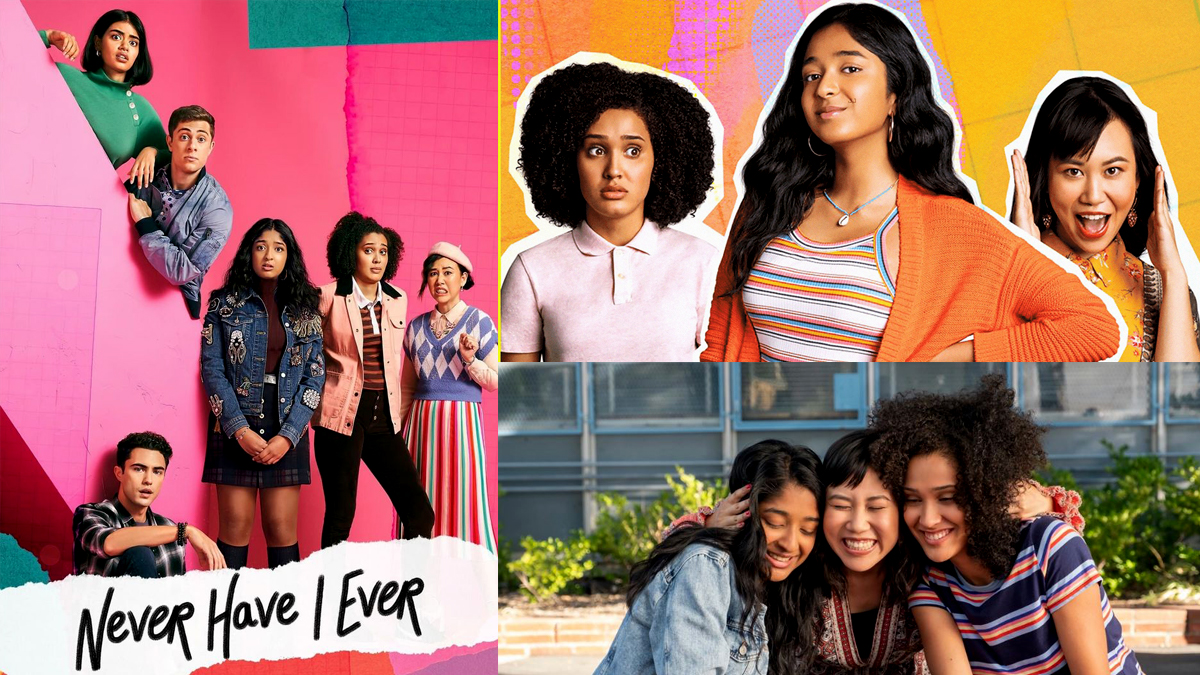 Devi Vishwakumar aka Maitreyi Ramakrishnan has awakened many memories of teenage life through her series Never Have I Ever. Unlike most shows, Devi shows transparency and truth about how one feels while going through adolescence. Never Have I Ever has three seasons till now and each season comes with a brand new twist speaking louder about what is it like to be a teenager.

Adolescence is a time when teenagers struggle the most due to sudden changes in their bodies. Raging hormones, gender identity, sexual orientation, popularity, growth, and development, academics and competition, relationships, breakups, friendships, etc. It’s not like none of it matters when you are a kid. It does. However, it triggers and confuses more during teenage.

Devi Vishwakumar’s character in Never Have I Ever reflects on similar issues. It possesses honesty about how all of us have dealt with everything in our teenage. I can personally relate to the character so much that throughout the show, I was like, “well, same here Devi, same here.” But as we have grown up, we understand better the reasons why Devi made a few blunders. What were the moments that made you root for Devi Vishwakumar?

Maitreyi Ramakrishnan gave us a character we can all relate to at some point in our lives. From her competitive nature toward Ben to her crushes to honoring friendships, Devi is a character one can look up to. Here are some moments from Never Have I Ever that made us hoot and root for crazy Devi!

Devi Viswakumar Was Open About Her Mental Health

From the beginning of Never Have I Ever we see Devi struggling with the pain of her father’s demise. She sees him from time to time but those are nothing but hallucinations that she prayed could be true. However, we see Devi showing plenty of emotions toward her crushes and friends which leads to destruction mostly. But every time when Devi burst into tears or messed up, she spoke about her mental health openly.

In each episode, we see Devi taking counseling sessions and opening up about her life situations. Especially in Season 3, we see Devi talking about being anxious regarding seeing her father in the crowd once again. She explains everything to her mother’s friend who consoles and helps her out. Similarly in another episode of the show, Devi thinks her dad is back in the form of a coyote and gets bitten by it. She later clarifies to Paxton the reason for her naivety.

Devi From Never Have I Ever Is True To Herself

No matter what, Devi is true to herself. Whenever she feels something, she admits to it instead of pushing it away. Even though she cheated on Paxton and Ben by dating both of them, she was honest about her confusion about liking both of them. I know it sounds like a lot but she is just a teenager.

Maitreyi’s character was able to represent the life of a teenager like a mirror image. Call her rebellious or stubborn, Devi was fearless in making her own mistakes and learning from them, though not instantly. She knows what she wants and does everything to achieve it. Whenever Devi was insecure or jealous, she would admit that to herself and her counselor.

Friendship Is Very Important To Devi With Craziness

Though we have seen Devi being selfish and jealous in friendship, she learns from her mistakes and knows how to make things right. In the first season of Never Have I Ever, Devi’s friends told her they needed some time away from her. They called her out for not being there for them and obsessing over Paxton.

In the second season of the teen drama, she starts a heartbreaking rumor about Aneesa, another popular Indian in the school, out of jealousy. And after cheating on Paxton and Ben, she lost two boyfriends as well as friends. It was pretty messed up. However, when Devi realizes how many people she had hurt due to her selfishness, she makes up to them and goes beyond limits for an apology. Devi was a better friend than she is given credit for.

SEE ALSO: ‘And Just Like That’ Season 2: Everything To Know

The Character’s Focus On Academics

Devi was a bright student and always in competition with Ben. After plenty of heartbreaks and breaking hearts, losing friends, and grieving for her father, she still kept her grades up to the mark. In fact, she is the reason why Paxton Hall Yashida got into a good college. She pushed him to do better keeping aside the misunderstandings and wall between them. Now that’s definitely a good ‘nerdy’ friend.

Devi brings out the best in Ben as well by competing and challenging him to do better. Believe it or not, even Ben admits to this. However, the competition and jealousy bring out the crazy Devi. In season 3 of Never Have I Ever, in the debate competition Devi cheated by throwing away the other team’s binder to win. Anyway, her intellect proved the intention was unnecessary giving a big win to her team.

Never Have I Ever Season 2 ends with Devi and Paxton showing up as a couple to the prom. Hence, season 3 begins with the pair entering hand-in-hand at the school. The crowd finds it unbelievable and a few girls in the washroom called Devi a ‘huge slut‘ because that was the only logical explanation they could think of.

But instead of doing something stupid this time like starting a rumor, she took the high road and confronted them. However, she did admit to things she wasn’t supposed to spill out, but at least she tried. And she did let the girls manipulate her into thinking Paxton does not date girls if they don’t have sex.

Devi Is Courageous And Stands Up For Herself And Others

We know the character does not always take the high road, but her courage will make you root for her on this one. Devi is direct and upfront. In Never Have I Ever there were many moments where Devi stood up for herself and showed people their limits.

In season 2, Devi stands up for herself by asking Paxton to accompany her to the prom else she couldn’t be with him. That resulted in the couple’s dashing entrance in season 3.

When Des’s mother asked him to break up with Devi and he started slowly distancing himself, she confronted him. After he said “dating you wasn’t worth pissing off my mom,” she threw a coffee in his face instead of caving. I get it, it’s not the best thing to do, but he deserved it. He wasn’t honest with her and even though he liked her, he did nothing to understand her part. His mother questioned Devi’s mental health and sanity which was outrageous and Des cocooned behind his mom.

Devi was honest about her opinion on sex with Paxton that she wasn’t ready. Honestly, most people don’t have the courage to do so and under peer pressure make bad decisions. She also called out Paxton for hurting other girls at school and made him apologize if he really wanted to be with her.

The Character Finally Learns Self Love Is The Best Love

Devi was often seen as someone ‘too much’ which hit her badly in Never Have I Ever season 3. While she was crying in the bedroom thinking she has problems and seeing her dad, her mother made her realize otherwise. “You are never too much and you are always enough,” said her mom and made her understand she is loved for who she is. Even Maitreyi, the actress playing Devi, believes that self-love is indeed the best kind of love.

Let me clarify this, I am talking about Devi’s positive attitude and not approach toward her problems. Her strategies are pretty much like any other teenager’s or maybe even worse at times. But Devi never gave up. Instead, she always kept a positive mindset that everything will be alright in the end. Yes, she has made some terrible mistakes, but she did find solutions to them eventually and made everything fine.

Not just her own issues, she helped everyone come to better conclusions with her ideas. Her advice did help her friends in tough or confusing times.

Never Have I Ever Lead Character Is Confident

Throughout all the seasons of Never Have I Ever, we see Devi’s confidence only growing. Not just academically during her presentations in class or debates, but even in her personal life, she is a confident person. No matter how insecure you call the character, her enthusiasm shines bright like a diamond when she first introduced herself to Paxton and asked him out.

Although, she has used her confidence in the wrong areas at times like dating both lads at a time. But she made up to them and kept the friendship alive. Devi’s plans not always worked out for the best but she always believed in herself. In fact, in season 3, she confronted Des for ghosting her and later asked him out after making things clear. And that’s the kind of unshaken confidence one needs in life.

The Character’s Love For Her Parents

Devi and her Mom have had their share of differences and we can call their relationship a rocky one. Eventually, the two of them get close and Devi begins to understand her mother’s overprotectiveness while her mom starts giving her the freedom she deserves. But Devi losing one parent broke her into pieces.

In season 3 of Never Have I Ever, Devi is given a chance to complete her final schooling at the top high school. When she visits it, she falls in love with everything about it and agrees to go there. However, when she sees Paxton hugging his dad, it strikes her that she only has her mom left and would want to spend one more year with her. Devi changes her decision and decides to stay at her current school. To be honest, I can totally relate to her as this is the reason why I have chosen to work from home.

Devi’s love for her father is shown throughout the whole series. She hallucinates or dreams about him every now and then. And when Des’s friend broke her dad’s racket, she called him out for being irresponsible. In the end, she gets the racket fixed and hangs it in her bedroom where she can honor it every single day.

What do you think about Devi Vishwakumar’s character in Never Have I Ever? Would You root for her the way we do?

3 thoughts on “Never Have I Ever: 10 Times We Rooted For Devi Vishwakumar”