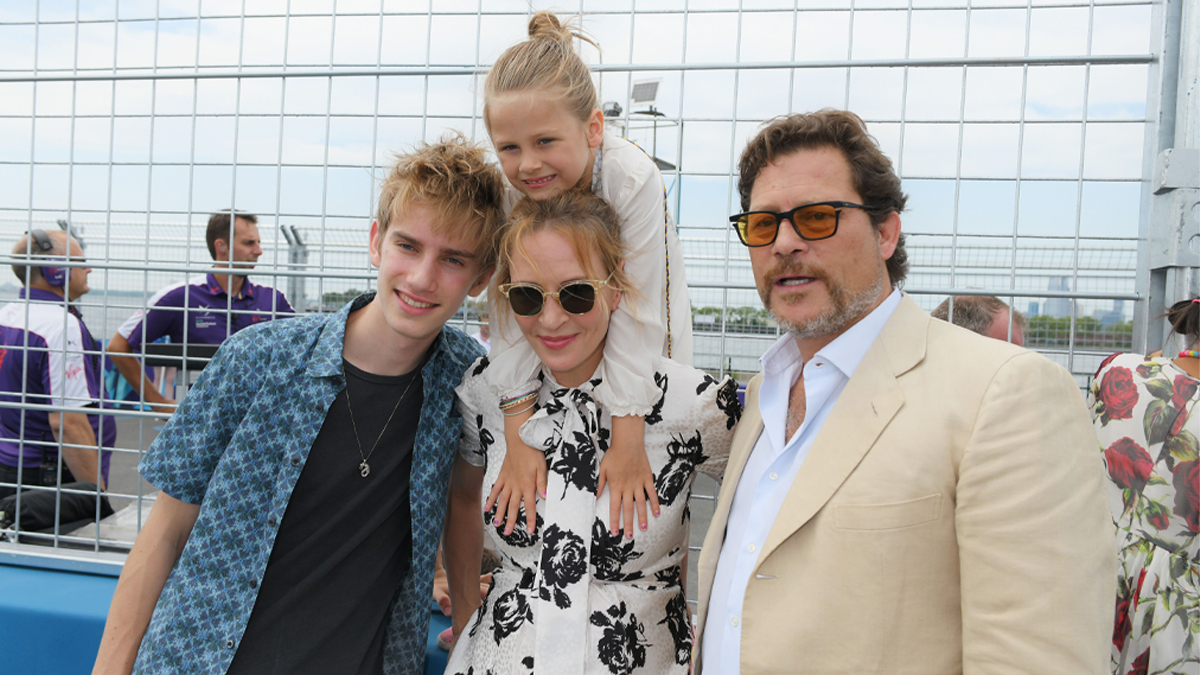 Uma Thurman recently made an appearance at the premiere of Some Like It Hot. The popular Pulp Fiction and Kill Bill actress made heads turn with her gorgeousness. But it was the presence of daughter Luna Thurman-Busson that made the event more special. That’s because not every time do you catch them in the same frame. While Uma donned a grey belted blazer with a black turtleneck and a midi skirt, her mini version also upped the glamor quotient. Luna wore an olive green poncho on top of a matching dress. She also flaunted a Celine clutch with a lot of pride. Someone definitely got her mom’s fashion genes. Here’s what else we know about Uma Thurman’s youngest-born, Luna Busson, so far.

Luna was born on July 15, 2012, in Boston, Massachusetts, USA, and is currently ten years. She is the daughter of the diva Uma Thurman and her ex-fiance Arpad Busson. While her mom is an actress and former model, her dad is a French financier. Uma was 42 years of age when she gave birth to Luna. The couple started dating around 2007 and separated for good in 2014. As for Luna’s education, we do not have any concrete information about what school she goes to. But her mother’s preference was St. Ann’s private school in Brooklyn. It is one of the top-ranked schools in the United States, which is also known to enroll celebrity kids.

Does Luna Have Siblings?

Luna Busson may be the only child of her parents. But she has elder step-brothers and sisters. Her mother was married to American actor-director Ethan Green Hawke from 1998 to 2005. They have a daughter Maya Hawke and a son, Levon Roan Thurman-Hawke. You may best know Maya as Robin Buckley from the hit Netflix show Stranger Things. As for Levon, he is a musician and is anticipated to start the acting journey with The Crowded Room. The series stars Tom Holland in the lead. From her father’s side, Luna has two half brothers, Arpad Flynn Alexander Busson and Aurelius Cy Andrea Busson. They are born from Arpad’s relationship with Elle Macpherson and lovingly call Luna ‘LuLu.’

Uma Thurman and Her Ex Arpad Busson Had An Inconsistent Relationship

The bond between Luna’s parents always had rough patches. Their tale began in 2007 after they attended a private dinner event together in Milan. The following year 2008, saw them getting engaged. And then, just after a year of commitment, the relationship broke, but “they remain friends,” as per sources. It was believed that the long distance was a concerning factor and that they were “never in a rush” to marry. After a while, they rejuvenated their love, only to finally bid adieu to one another in 2014. Luna was born to them in between.

Her Parents Were Involved In A Bitter Custody Battle

Uma and Arpad ended their relationship the first time around on a cordial note. But their second time was not even close to that. They both contested fiercely to gain custody of their daughter Luna Thurman-Busson. Uma claimed that her former lover has an addiction to prostitutes. As for Arpad, he complained that she mixed alcohol with prescription pills. Things got so heated up that a judge even scolded them with a “Reasonable people work these things out” remark.

It was also reported that Busson was unhappy with Uma’s choice of school for their girl. He felt that St. Ann’s school had a “depressing” atmosphere with “small classrooms that were cluttered.” He also thought the children “looked dirty and disheveled.” This upset not just Uma but also “a lot of Brooklyn Heights parents.” The custody fight got finally over in 2017, with Uma getting primary custody. She felt “wonderful” and relieved “to have closure.” Luna’s dad got permission to visit monthly.

Do You Know She Has Five Names?

Here’s a fun fact about Uma Thurman’s youngest daughter. Well, the ten years old lady Luna Busson has five names. Yes her full name is Rosalind Arusha Arkadina Altalune Florence. And it was Uma’s firstborn, Maya Hawke, who came up with the best explanation. Dangerous Liaisons actress revealed that in one of her interviews later. Maya thought her mom “just put every name” she liked because “I probably wouldn’t get to have any more children.” Uma also agreed that “We couldn’t quite agree on the name, so we call her Luna.” She believes her little munchkin is “lucky that way.”

Luna Thurman-Busson sure is the apple of the eye of everyone.