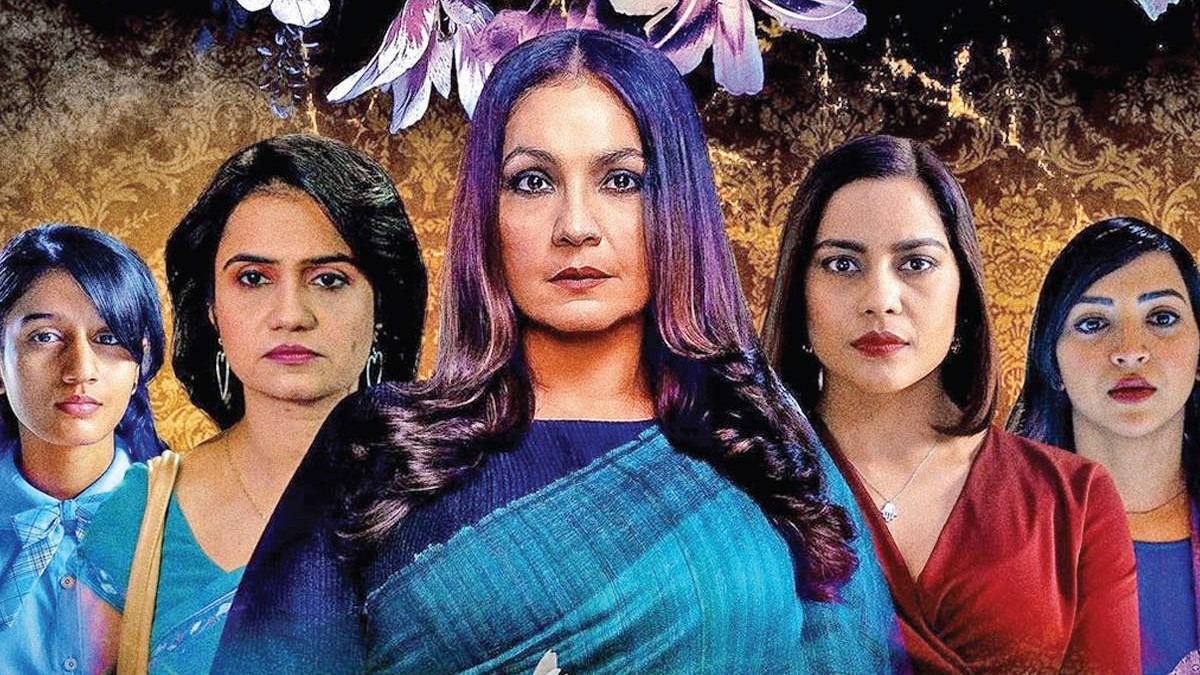 In its heart, Bombay Begums is all things B. Bold, brave and beautiful?

It’s sad to say that the only beautiful thing we got to see in the show was Pooja Bhatt’s magnetic comeback, her remarkable collection of sarees, and Amruta Subhash’s honest acting. In their bid to revolutionize the universe of progesterone-driven content and show the ‘flawed’ and ‘raw’ side of women, these days, OTT makers are left with just a handful of ‘feminist’ tools.

And this feminist formula that almost always seems to work involves – alcohol, drugs, sex, and the (one that shouldn’t be named) infidelity! And what’s worse is you get to witness a heavy dose of sexism and pseudo feminism in the six-hour-long Netflix series, which is ultimately supposed to be a show about womanhood and solidarity.

The Lives of the Four Begums of Bombay

Revolving around Pooja Bhatt’s lives as Rani, Shahana Goswami as Fatima, Plabita as Ayesha, and Amruta Subhash as Lily, the show keeps revolving around the preconceived notions about women. Pooja Bhatt does a worse job of juggling between her bank, her step-kids, and her extra-marital affair than we do between our diet and our cheat meal.

For starters, the dialogues of Rani (CEO of a bank) talking about the ‘investment’, ‘deal’, ‘procurement’ with her colleagues seem more rehearsed than some of Rahul Gandhi’s speeches. Secondly, she is treated like trash by her two hormonally-charged step-kids and lastly, the constant conflict between her love for Rahul Bose (Governor of Bank) and feelings for her husband Naushad are too predictable.

Amid all of this, Rani’s step-son decides to get intimate with a sex worker and somehow runs over her son. And enters Lily! To be honest, the only spark the show had was when Amruta Subhash was in the frame. As the head-strong mother, who would go to any length to get a better life for her son, Lily breathes life into her character. And in the scenes where she is in front of Rani, she totally owns it.

We also have Fatima, played by a sullen-looking Goswami. Here again, the plot revolves around the age-old cliché of an ambitious wife, and her under-achiever husband, and how they fail to make their marriage work. Fatima seems trapped in a zone of mono-emotion and is annoyingly repetitive.

Last but not least, we have Ayesha, a girl who is not exactly good at anything but is just always around the top guns of the company. Ayesha is trying to figure out her sexuality and there come many hurdles her way – girlfriend, boyfriend, sexuality, harassment, parental expectations, and what not!

SEE ALSO: The Psychological Impact of the Term Anti-Aging

The Background Theme of Anti-Feminism

You might get an impression that the women are ready to break the age-old shackles of patriarchy, but soon you realize they are tip-toeing on anti-feminism lines. Though in the end, all the four women come together and stand rock solid behind each other, throughout the show, it remains a lopsided affair. We don’t get to see any cohesive collaboration among the women.

Each one is trying to project itself as a better (stronger) version than the other. The four women are trying to get ahead in the race while pulling the other down. Rani might be at the top of her game at work, but back home, she desperately tries to be the best wife, the best mother, and a ‘complete’ woman. Both Fatima and Rani may be phenomenal at their work, but both are dwindling trying to be the perfect homemakers too. And in doing so, the show takes us back to the dichotomy of how women are not deemed perfect unless they achieve the perfect balance between both work and home.

The Good and the Bad

We have to agree that the makers and writers have tried to show each of the four Begums’ realness and humanness. But, our question is – Why is cheating empowering? Since when did infidelity become so liberating? Why is the idea of a happy marriage between a more successful woman and a lesser successful man so far-fetched, and why does the opposite become readily acceptable?

In Lily’s case, why is the show reinforcing society’s expectations from a mother of being sacrificed? Why did Rani need Shai’s approval of her being the ‘perfect’ mother when the father didn’t bother getting the ‘best’ dad tag? Why was Ayesha expected to be exceptional at her job just because she also happened to have a beautiful face? Why wasn’t the same expected from her colleagues?

The show did try to open dialogues on several topics brushed under the carpet. And in doing so, it also left us with many thoughtful realizations and unanswered questions. Bombay Begums starts with the promise of a fiery ride and has many wow moments too. But in the end, sadly, it turns out to be just another expired loop of internalized misogyny and sexism.

Directed by the makers of Lipstick under my Burkha and Dolly Kitty Aur Woh Chamakte Sitare, Bombay Begums has recently been into controversy for its portrayal of women and children. Have you watched Bombay Begums on Netflix? What do you think of the show?